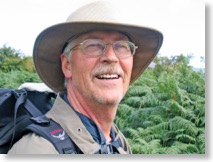 Personal description: In the year 1942, on the 16th day of December, I was born in Hamburg, Germany - in the middle of a bomb-raid! The following time as refugee has surely left its trace in my subconscious, as some people will call me restless, while others will call me ”very flexible and adaptive” - which can more or less be the same thing...

At least any new challenge will get me to highest performance, while routine is virtually killing me. The struggle for survival immediately after the war (together with some genes) have created another pattern in the brain: the constant and automatic search for alternatives - how can this thing be used / misused for a total different purposes than it was intended for? - how can it be simplified and still do the same job? - what is the smallest common denominator for this problem? In other words: the ability to find the best way around...

now almost 78 years old, but still in good shape and feeling much younger...
since 1993 married with Carina (I need some more pages to tell all the good about her...)
now danish citizen, living in Denmark since 1971, before in Germany.
languages: Danish, English and German fluently also in legal and technical terms, Swedish and Norwegian on negotiation level.

after basic school-education in Germany:

1958-1961 education as reproduction technician at Axel Springer Publishing Co. in Hamburg
1961-1962 continuing at Axel Springer Publishing Co. as reproduction-photographer
1962-1964 drafted to army-services - education as radio-operator (morse) and radar-technician
1964-1966 back at Axel Springer Publishing Co. in Hamburg as reproduction-photographer
1967 technical manager of Willich & Schulz, small offset-printing company in Hamburg
1968 back at Axel Springer Publishing Co. in Hamburg as quality controller in repro-departement
1969 founded Glunz & Löding, Offsetrepro, in Hamburg, sold in 1972
1971 moved to Denmark as R&D-manager for Hans Lüth A/S - filmprocessor-manufacturer
1973 founded Glunz & Jensen A/S, director, until 2002 member of the board of directors - www.glunz-jensen.com
1980 sold majority of shares in G&J when G&J went public at Copenhagen Stock-exchange
1980 and onwards: consulting, intensive work with Apple-computers, DTP, digital printing
1983 moved back to Hamburg due to divorce
1983 start-up over 3 years Glunz & Jensen do Brasil in Curitiba, filmprocessors
1991 moved back to Denmark again. Founded Danrip A/S (Raster Imaging Processors)
1997 sold Danrip A/S shares.
1997 founded Grafisk Center Roskilde ApS, DTP and Xeikon Digital Printing
1998 moved to Greve, renamed to Glunz Grafisk Center, sold 1999 to partner
1999 founded Glunz Consulting ApS and moved to Gl. Havdrup
2004 moved to Køge
2005 walked the entire Camino Frances in Spain together with Carina (850 km)
2005 sold shares in Glunz Consulting ApS
2006 working for and with Finn Strandgaard (www.strandgaard.dk) as IT manager (Apple)
2007 Appointed as distributor for RagTime in Scandinavia - The professional Business Publishing Software
2008 due to management buyout in RagTime, discontinued distributorship
2008 officially retired now at age 65, but still continuing with consulting, graphic and photographic jobs & webdesign
2013 finally closed Glunz Consulting due to too much administrative burden compared with activity level, newly imposed by the government
2021 in the meantime lot of traveling and construction work on house and garden, photovoltaic, vacuum solar heat and Apple support…